“The pope stands between God and man, lower than God, but higher than men, who judges all and is judged by no one.”
—Pope Innocent III, 1161-1216

What does this say about the power of the Catholic Church in the Middle Ages?

Learning Targets:
Overall, what purpose would a picture or painting like this serve for the Catholic Church in Medieval Europe?

* Get this checked by me to make sure your information is correct for a $!

There are 4 different stations activities located around my room that you need to complete! You will follow the directions at each station to complete the tasks and record any required information.
﻿* Get checked by me after completing 2 stations for a $!

The Crusades - Causes and Effects

Directions:  Follow the Tasks below in order to fill in your notes sheets about the Crusades. 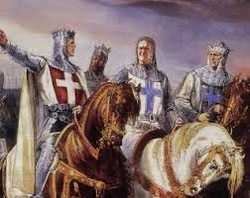 Task 1 - Read this Summary of the Crusades.  Use it to fill in key term definitions.

During the 1000’s the heart of Christianity and the Catholic Church was located in Rome, Italy.  This was where the Pope and other high clergy officials lived.  All of Western Europe was living under the Feudal System.

At the same time, another great civilization,  was having a Golden Age.

The Arab Muslims had control of half of Spain, Northern Africa, the Middle East and part of Asia Minor (Modern day Turkey).

But in the early eleventh century, the Turks—who were also Muslim—took control of the Holy Lands, including Jerusalem. Rather than allowing religious freedom, they closed Jerusalem to both Jews and Christians.

In 1095, Pope Urban II received the Byzantine emperor’s plea asking armored knights to help open the Holy Land and defend against the Turks.

The Pope responded and asked the knights of Europe for a crusade (one of many religious military expeditions made by European Christians to try to take the Holy Land and Jerusalem from the Muslims between 1095 and 1291)  or holy war against the Muslim forces in the Holy Land.

As a result of this plea, several armies were formed and started the trek to the Holy Land. The symbol of the crusader became a red cross sewn on their tunics.  Not only knights went to the Holy Land, peasant men, women and families traveled there as well.  Winning the Holy Land for Christianity was one of the MANY causes of the Crusades.
Task 2 - View this video for a quick summary.  It's ok if you don't understand EVERYTHING he says, he is British and talks fast!  Then write 2 new facts you learned from the video in the chart on your notes.
​
Task 3 - Use the 4 primary sources below to determine 4 reasons people in Western Europe were willing to go on Crusades.   Read each source and then sum it up in your own words and add it to the appropriate box on your notes sheet.  YOU ARE NOT COPYING THE SOURCE - you are simply summing up the main idea in a sentence or two.
Task 4 - Use the map below to do the following tasks on the map in your notes.  This map is ONLY showing 4 Crusades, there were more than this! 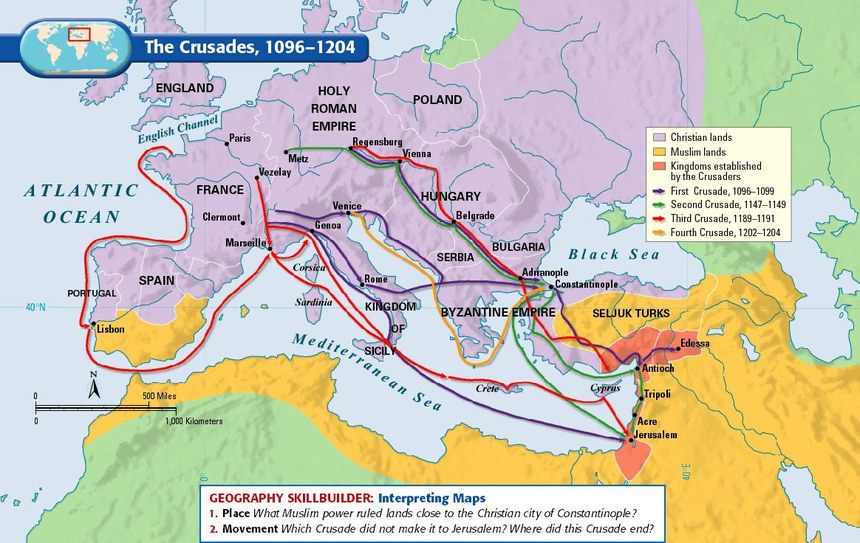 Activity 1 -
The Crusades were a significant (important) event in world history.  The events of the crusades impacted people at that time but also had lasting effects.  When historians look at the past, they try to evaluate the events.  You will be recording the 5 most important impacts of the Crusades based on what we are studying the rest of this year.   They are highlighted!


Activity 2 - Read the other impacts on the list.  Choose one to record in your notes that you think is interesting or noteworthy.
Impacts/Effects of the Crusades

Concept Check - The Power of the Church and the Crusades

Edcite Assignment - The Crusades and Trade

Click on the link to edcite and complete the assignment on the Crusades.

Continue your Life in Medieval Europe Activities for $'s!

TASK 1 - Sentence Writing ActivityFollow the directions for Task 1 in the packet and complete.  You can use your notes about feudalism and knowledge from the Edcite to help you make the sentences!

TASK 2 - 10 Dangers of the Medieval Period (in Europe)1. Get the packet that goes with this article from the front table.  It is PINK.
2. Read the directions on the packet.
3. Use the information in the article to do the activities on the assignment.  Your answers/responses should show evidence that you read the information in the article and used it to inform your decision!

*Click on the blue link to get to the article. ​
10 Dangers of Medieval Period

This website is loaded with quizzes, puzzles and games about the Crusades!

​You can play games that were actually brought to Europe from the Middle East!
Crusades Games
Powered by